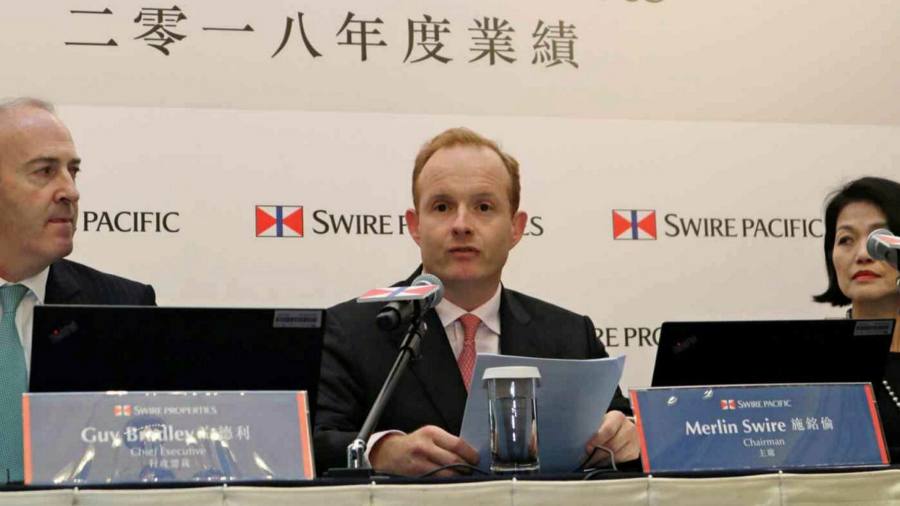 
Merlin Swire’s appointment as president of the famed Hong Kong trading house in 2018, which bears his family’s name, has been touted as the start of the group’s “next chapter”.

The 47-year-old was the first member of the family since the 1860s to take on the role of ‘taipan’, the traditional name for the head of a British-owned colonial-era Hong Kong trading house. .

But three years later, this chapter seems to have ended to the surprise of some observers of the company, given the crisis the group is going through in Hong Kong. He announced last month that he would return to London to head the holding company Swire, leaving the group of owned airlines, whose flagship is Cathay Pacific Airways, face some of the biggest challenges in its history.

The 205-year-old company has been rocked by political unrest in its territory and by the Covid-19 pandemic. Cathay is struggling for her survival and Swire’s vast real estate portfolio in Hong Kong has taken a hit.

“In the history of the company, this is the worst time to have a stint as a taipan,” said Richard Harris, fund manager at Hong Kong-based Port Shelter Investment Management.

The replacement for the outgoing chairman is Guy Bradley, previously responsible for Swire’s real estate operations. This indicates that the group should focus more on real estate and less on Cathay, which has been battered by the closure of international borders.

But analysts are wondering if the change in direction will be enough to get the conglomerate back on track.

“They have to adjust their strategy. . . They need a reshuffle to make everyone wake up, ”said Kevin Au, director of the Center for Family Business at the Chinese University of Hong Kong. “Swire has been too conservative. . . because of their history of success.

Investors and observers say Merlin Swire leaves Hong Kong having only had a modest impact on the conglomerate’s empire in Asia. A year after taking office, Cathay staff participated in anti-government protests across the territory, prompting China to threaten the company with regulatory action. After Merlin Swire met with government officials in Beijing, Cathay ousted chief executive Rupert Hogg while President John Slosar resigned shortly after.

These developments, while appearing to smooth out relations with Beijing, underscored the extent to which the Communist Party government increasingly expects the Swire Group to publicly support its positions even when they conflict with foreign policy. British.

In 2018, the group welcomed the appointment of Merlin Swire and his move to Hong Kong, a sign of the company’s unwavering commitment to the former British colony. “This return to Hong Kong reflects the importance of Hong Kong to the group’s business,” the company said.

Today, Hong Kong has become a drag on its performance. Swire Pacific reported a rare underlying annual loss of HK $ 3.9 billion ($ 502 million) in March as the pandemic hit Cathay and its real estate business in Hong Kong. Jardine Matheson, a rival colonial-era trading house that has diversified more broadly into Southeast Asia, reported underlying net profit of $ 1 billion for the same period.

Hong Kong, while part of China, is also separated from the mainland by border controls, meaning Cathay has no domestic market to fall back on. Hong Kong’s coronavirus quarantine measures, among the strictest in the world, have not helped.

Swire needs to “try something different” and focus on the mainland China real estate unit previously led by Bradley, a Hong Kong businessman close to the company said.

Swire’s other interests include the bottling of Coca-Cola in China, marine services for the energy industry and Taikoo Sugar, a colonial-era company. But it is increasingly focusing on real estate in Greater China, having developed mixed-use shopping and commercial districts on the mainland.

Merlin Swire will continue to hold a prominent role at the helm of the John Swire and Sons holding company, which sits above the Hong Kong listed companies Swire Properties and Swire Pacific. “The really important strategic decisions are always made by the family in London,” said a person familiar with the company.

A guest at a dinner party Merlin Swire attended described him as calm and observant. “He was one of the smallest and most humble people I have met in the business world,” said a former business partner.

Insiders said Merlin Swire and his family were taking the tube or taxis in London, while the former business partner told the Financial Times he flew with low-cost Australian airline Jetstar on a trip in New Zealand.

According to a person who worked closely with Merlin Swire, his tenure was a “decent minimum” but he “never really clicked” with his position as president. Swire defended his record, saying his management had “done a great job in sustaining our progress” and the company was focused on “sustainable growth.”

Some Hong Kong establishment figures say Merlin Swire is just one of the leaders in the long line of Swire and Jardines who have never chosen the Asian city as their long-term residence.

“There is more prestige to being back in London than in Hong Kong, where it is hot, humid and crowded,” said a veteran Hong Kong businessman familiar with the company. “When you’re extremely wealthy, you can have that option and hire the right people to handle things for you. “

Some company insiders said they weren’t surprised when Merlin Swire returned to the UK. The need for a change in leadership so Bradley could strengthen the company’s focus on ownership became evident, they said, when the pandemic first hit Cathay financially last year.

A former Swire executive said the big challenge for Bradley would be to reposition the company. Swire’s recent losses in office and retail buildings in Hong Kong were partly offset by its real estate business in China, which was boosted by the country’s economic rebound after Covid-19.

However, a slightly larger share of the company’s real estate assets in square footage is still located in Hong Kong, and most of those in mainland China have already been developed. Swire said he has a “good pipeline” across mainland China, Hong Kong, Indonesia and Vietnam.

“In China, they’re moving very, very slowly, they’re very conservative,” said the former Swire executive. “The Swire family needs to show how confident they are in China. . . and put their money where their mouth is.