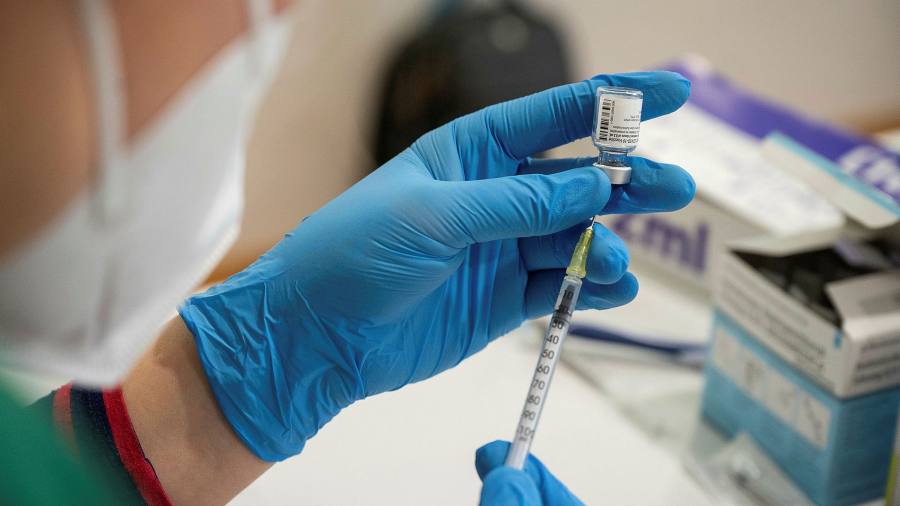 
The BioNTech / Pfizer Covid-19 vaccine appears to be significantly less effective against the variant of the virus that emerged in South Africa, according to a study published Wednesday.

The vaccine still works against the strain known as 501Y.V2, but the vaccine only produced a third of the antibodies it produced to the original virus in a lab study using a modified virus.

The partners said there was “no clinical evidence” that people vaccinated with their Covid-19 injection lacked protection against the variant. It is difficult to draw definitive conclusions from laboratory experiments on how vaccines will work on variants in humans.

But they said they were making investments and talking to regulators so they could seek authorization for an updated vaccine or booster vaccine “once a strain that significantly reduces protection against the vaccine is identified ”.

BioNTech / Pfizer’s vaccine was the first to receive emergency approval in many countries, including the United States and the United Kingdom. The pair expect to make up to 2 billion doses this year.

The paper, published in the New England Journal of Medicine, is based on experiments using the blood of 20 participants in vaccine trials. Scientists from Pfizer, BioNTech, and the University of Texas medical branch tested three different genetically engineered viruses, one with all of the 501Y.V2 mutations and two with subsets of the changes.

The scientists had previously found that the vaccine was likely to be effective against B.1.1.7, which first appeared in the UK.

But many other vaccine makers have found their vaccines to be much less effective against the South African variant. South Africa stopped deployment of the Oxford / AstraZeneca vaccine after preliminary data showed it did not protect against mild and moderate forms of Covid-19 caused by the new strain.

In clinical trials with sites in South Africa, Johnson & Johnson and Novavax have found their vaccines to be less effective against the variant. In a laboratory study, Modern found that his vaccine produced only one sixth of the antibodies in response to the 501Y.V2 variant compared to the original virus.

Some vaccine manufacturers, including Novavax and Moderna, are already preparing for clinical trials of a reformulated vaccine or booster vaccine.

BioNTech / Pfizer’s vaccine – like Moderna’s – is based on messenger RNA technology that can be quickly adapted to new variants. The companies said they were testing the vaccine against other strains, including one that first appeared in Brazil, and are conducting studies to monitor the vaccine’s effectiveness outside of the lab.