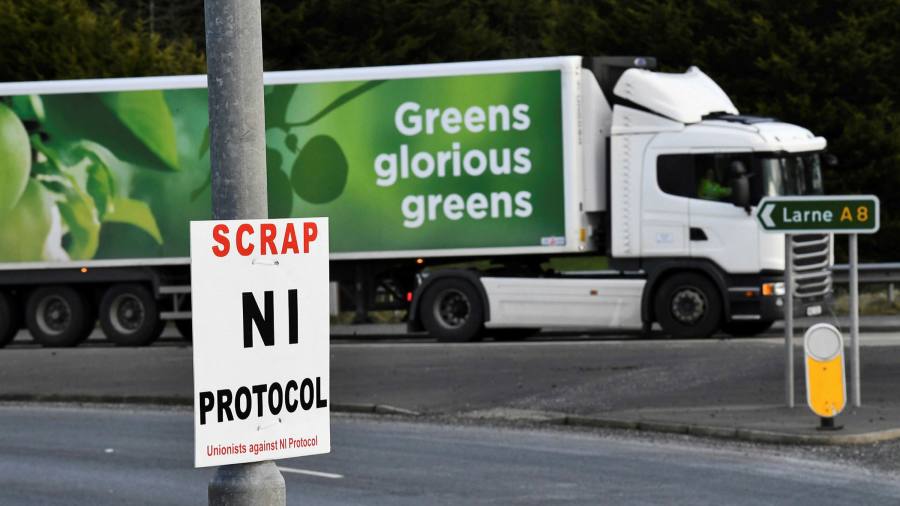 
London and Brussels plan to set up a high-level emergency hotline in response to growing problems on Northern Ireland in the weeks following the UK’s exit from the EU’s single market, a senior European Commission official said.

Maros Sefcovic, the European bloc’s point of reference on relations with the UK, insisted the two sides wanted to defuse recent tensions, but admitted that the fallout from Brexit now required “daily handling. “.

Sefcovic said he and Michael Gove, his UK counterpart, discussed this week launching an instant line of communication to resolve difficulties “as they arise, before they become big, big problems.” London is said to be open to the idea that it helps resolve issues on the ground quickly.

Frictions over new post-Brexit restrictions on the movement of goods between Britain and Northern Ireland were intensified by a swift abandonment EU plan, last month, it reportedly hampered imports of coronavirus vaccines into the province.

“What is very important in such a difficult situation is to have confidence in your partner and to work together to solve the problems,” said Sefcovic, vice-president of the European Commission, in an interview.

“Until the dust settles and the new [post-Brexit] system is introduced, I would say the relationship would really need daily care.

Sefcovic said the disruption to trade between Northern Ireland and the rest of the UK was not surprising given the “massive and massive change” triggered by Brexit. But he said solutions to the bottlenecks would only be possible when the UK fully implemented its obligations under the protocol to the Brexit deal in Northern Ireland.

“We clearly want to defuse the situation,” said Sefcovic, speaking after returning to Brussels after three hours of talks in London with Gove, the British cabinet minister. “We see that there is a recipe for minimizing – to the extent possible – the sometimes unavoidable consequences of the UK’s departure from the EU.”

The Northern Ireland Protocol requires goods moving from Britain to Northern Ireland to follow EU customs rules, but the UK has demanded an ‘urgent reset’ due to the constraints involved. imposed on trade. Among London’s demands are a series of 18-month extensions of grace periods to give businesses more time to adjust to the new rules.

Sefcovic said there was “of course a huge willingness to help” on the EU side, but first it was necessary to see how the existing arrangements were implemented on the ground. “I think this is clearly the precondition, without which it is very difficult to go further,” he added.

Sefcovic told Gove in a letter this week that the UK is failing to meet various obligations under the protocol. These included the full implementation of checks at border checkpoints, although Sefcovic said he believed these were start-up issues that could be resolved quickly.

The committee plans to speak to businesses in Northern Ireland and the Republic of Ireland in the coming week about how the protocol works.

“We operate under this new system [for] only six weeks, and I think we see on both sides that it was a massive change, ”Sefcovic said. “Some of the things we might expect, some of which I think are popping up right now.”

Sefcovic insisted that his talks with Gove had taken place in a “very positive atmosphere”. This week Irish Prime Minister Michael Martin urged the UK and parts of the EU to ‘calm down’ and ‘reduce’ rhetoric on Northern Ireland, in comments that prompted the irritation in some EU capitals.

Sefcovic said he had raised concerns with Gove over the UK’s refusal to grant full diplomatic privileges to the EU ambassador in London and his mission. He further complained about a UK decision to charge higher visa fees for nationals of five EU member states than for the other 22.