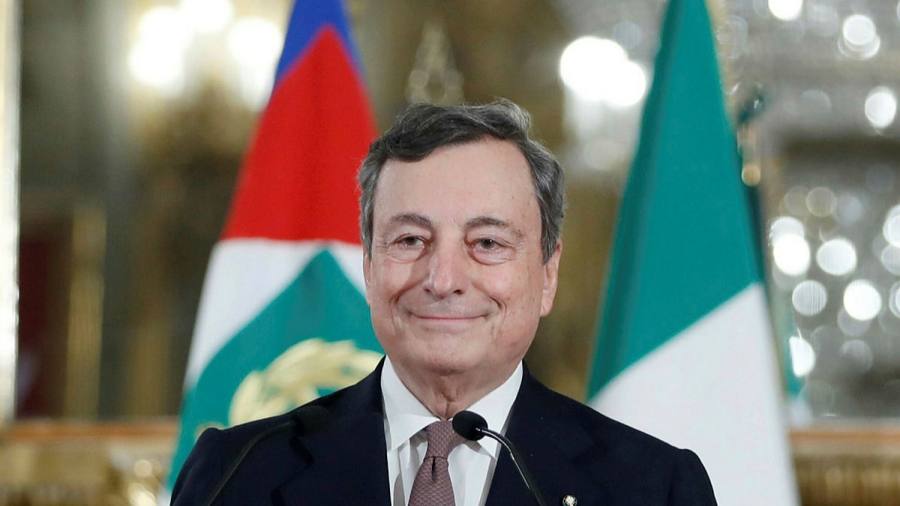 
Mario Draghi will be the next Italian Prime Minister after presenting to the President of the country a government of national unity which will be responsible for organizing a recovery after the Covid-19 crisis.

On Friday evening, Draghi, former president of the European Central Bank, met Sergio Mattarella, Italian head of state, to formally accept his request to form a new government, after gaining the support of almost all the major political parties. Draghi will be sworn in at noon on Saturday, the president’s office said.

Draghi, one of Europe’s most famous public officials, was unexpectedly called in by Mattarella earlier this month after the collapse of the previous coalition in the midst of the latest pandemic wave.

After the meeting, Draghi announced his roster of ministers, which includes a number of technocrats in central roles, but is mostly made up of figures from the country’s biggest political parties.

Out of 25 ministers, 15 are from parties that will support the coalition in parliament and 10 are non-politicians. The party with the largest representation is the former five-star anti-establishment Movement with four ministers, while the right-wing Forza Italia party of Silvio Berlusconi is making a comeback to government for the first time since 2011 with three.

Matteo Salvini’s center-left Democratic Party and Right-Wing League will each have three ministers, with the two remaining going to Italia Viva, the centrist of former Prime Minister Matteo Renzi, and the Left Free and Equal Party. Of the total, 17 are men and eight are women.

Like other countries in the world, Italy has been hit by a double health and economic crisis, having suffered more than 92,000 deaths during the Covid-19 pandemic and its deepest economic contraction since World War II.

Draghi’s appointment will be the fourth time in three decades that a technocratic prime minister has taken the lead after the terms of Carlo Azeglio Ciampi in 1993, Lamberto Dini in 1995 and Mario Monti in 2011.

However, the list of ministers selected by Draghi is different from that of previous so-called technical governments by including a large majority of ministers from Italian political parties.

Unlike the previous experience of technocratic government when former EU Commissioner Monti was tasked with launching an austerity campaign, Draghi will instead take care of drawing up plans to spend more than 200 billion euros in funds. recovery from the European Union.

He will also begin his tenure as prime minister as one of the country’s most popular politicians. A public opinion poll, conducted by Demos earlier this month, showed he had overtaken outgoing Prime Minister Giuseppe Conte in national approval ratings.

Even though Draghi only entered domestic politics less than two weeks ago, high hopes for his impact on the country’s future have pushed the price Rome is paying to borrow against Germany at its lowest level in more than five years.

In consultations with political parties over the past week, the prospect of a unity government led by Draghi also shook the political landscape, with several major parties drastically shifting positions to join his coalition.

The Salvini League and the Five Star Movement, both of which were previously hostile to the EU and the single currency, have pledged their support for a man seen as a pillar of the European establishment.

In an online vote held on Thursday, grassroots members of the Five Star Movement held a poll that required its leaders to endorse Draghi’s support. This means that the former anti-establishment party will be part of a coalition alongside its once-nemesis, Berlusconi’s Forza Italia.

With the backing of Five Star and the League, the two most important in the current Italian parliament, as well as the backing of the center-left Democratic Party, Draghi is set to start his government with a huge majority as he begins to try to lift the country out of the crisis.